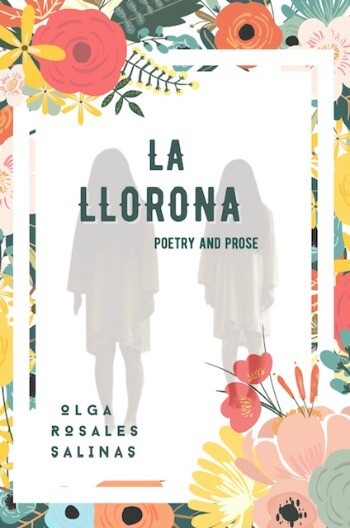 Olga Rosales Salinas is a poet and nonfiction writer interested in the intersectionality and ambiguity of the various roles she plays as mother, daughter, Latinx-sister, philanthropist, and fan of dry humor and martinis. She has lived her life writing down experiences as a way to process, heal, and celebrate. Her work explores themes of sisterhood, assimilation culture, faith, loss, dating, marriage, motherhood, and womanhood overall.

Rosales Salinas' debut collection of poetry and prose, La Llorona, starts with a journey between two lovers, La Llorona and her Beloved. While La Llorona writes from the land of the dead, her Beloved replies from the land of the living. The letters between the two lovers play as a backdrop to the short story, La Llorona, that ends the collection. Because of these letters when we read the short story we already know the main character; we know her inner thoughts, sorrows and the reasons why she haunts the living.

Framed by the love letters, the book's three sections cover the mercurial relationship with "home," the journey through the "process" of coming of age, and motherhood through the fogged lens of fear. Throughout this work fear presents itself by way of two Mexican-folklore characters that Rosales Salinas' grew up fearing, La Llorona and El Cucuy. Rosales Salinas' describes what life is like when fear becomes more than inner dialogue, but instead grabs hold as an integral facet of identity.

The book's hallmark short story is La Llorona, wherein Rosales Salinas reimagines the folklore she was told as a child and places it in a modern-day Watsonville, California. In that short story we also meet the Rivas family who are confronted with their own haunting as told from the same street and vantage point as La Llorona. While this story takes its liberties with the original folklore, Rosales Salinas imagines that La Llorona was more than just folklore. She imagines her as a real mother, full of loss and regret, and yes, as an undiagnosed victim of postpartum psychosis.

*All proceeds from this publication will benefit the #RosalesSistersScholarship -- a scholarship benefiting first-generation and immigrant students in the Central Coast of California.

Save this product for later
Display prices in: USD